Domestic solar plus battery storage: a revolution in the electricity market

NB. None of the figures or statistics in this article have been independently verified by Energy Saving Trust.

It’s an exciting time for the UK energy sector.

Older fossil fuel and nuclear power plants are due to be de-commissioned by 2025, at the same time as electrification of the transport system is proceeding at a steady pace, fuelling a significant increase in the demand for electricity. It is hardly surprising that the ‘capacity margin’, the buffer between electricity supply and demand, is tightening.

Furthermore, with the advent of renewables, balancing supply and demand within the National Grid is becoming ever more challenging, with irregular peaks and troughs according to the weather conditions.

Spirit Energy first started installing battery storage systems for homeowners three years ago.  At that time, system functionality was limited, and there weren’t that many systems to choose from. It generally cost more to store a unit of excess solar electricity than it did to buy one off the Grid. Only the greenest ‘early adopters’ were prepared to sign on the dotted line.

Since then, the big boys of energy (such as Shell, BP, E.ON and EDF) automotive (Nissan, Tesla) and of battery storage itself (Duracell) have all entered the energy storage market, prices have fallen, and the whole landscape has transformed.

Most exciting for the homeowner is that batteries now have management systems enabling a multitude of potential applications:

All of this is made possible thanks to the roll out of smart meters, which enable two-way metering of electricity (import and export) and the introduction of a number of ‘time-of-use’ tariffs whereby home owners pay different rates for electricity purchased at different times of day.

Hundreds of thousands of domestic solar systems have been installed in the last 10 years under the Feed-in Tariff scheme for solar PV.  The systems typically export around 60-70% of the electricity generated back to the Grid.

But because historically there has been no ‘export metering’ for small systems, system owners are paid a ‘deemed’ export tariff (currently 5.24p / kWh) in respect of 50% of the electricity generated by the system, regardless of whether or not the electricity is actually exported.

Across the nation, electricity demand reaches a high in the late weekday afternoons (4-7pm), and then falls to a low overnight. However, to date most domestic properties have paid a single rate electricity tariff which doesn’t reflect the peaks and troughs of demand. Some domestic properties are on an Economy 7 (or Economy 10) tariff with a ‘peak’ rate (15-20p per kWh) and an ‘off-peak’ rate (7-9p per kWh).

In January 2017, Green Energy UK introduced a ‘TIDE’ tariff with a banded tariff reflecting the national demand and supply profile and the true ‘underlying cost’ of electricity.  At the time of writing the tariff structure is as follows:

With the advent of smart meters, able to record half hourly electricity use, the market is likely to witness the gradual introduction of many more such ‘time-of-use’ tariffs.

Most battery systems allow the homeowner to set timed charge and discharge windows, thus enabling the system to ‘buy cheap’ (i.e. charge at night) and ‘use peak’ (discharge in the day), avoiding the punitive day time rates as far as possible.  If the homeowner has an electric car they can set the car to charge overnight at the low rate (7.91p per kWh for TIDE), and, based on a typical performance of 3 miles per kWh, their car will cost less than 3p per mile to run. 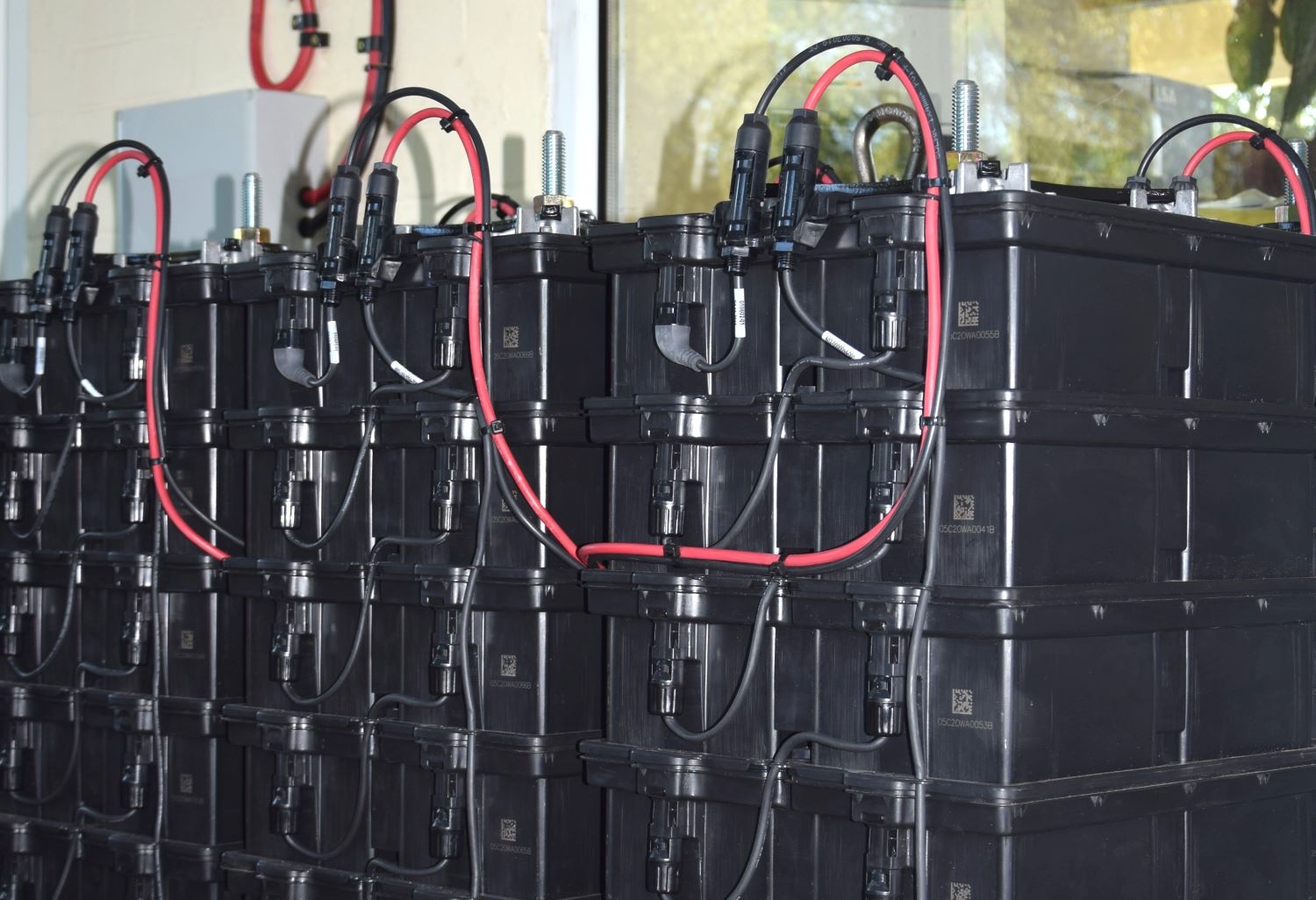 Homeowners can access income from these ‘Grid Services’ by allowing their battery to be controlled remotely by a third party (usually a utility such as EDF) and pooled with other batteries to make a large enough asset to bid for the National Grid contracts.

Many people think of back-up being a primary requirement of a home storage system, and of course it would be good to be able to keep the lights on and the kettle boiling in the event of a power cut.

For example if a homeowner reserves 33% of a 12kWh battery (4kWh) as a back-up, then they should be able to watch TV, use their laptop and keep the lights and freezer working for almost four hours, whilst enjoying a few cups of coffee in the process.

However, the cost of such ‘power cut insurance’ is that for 365 days a year, that 4kWh of their battery capacity will not be available for the other applications outlined above. The initial installation is also more costly. Whether or not this sacrifice is worth it depends how often the power cuts happen, how long they last, and how much hassle the homeowner feels they cause.

It is clear from the above that the economic benefit of battery storage is dependent on a few things:

However there are utilities claiming that the combination of solar, battery storage and a ‘grid service’ tariff could cut the average homeowner’s electricity bill by as much as 70%.  Watch this space.