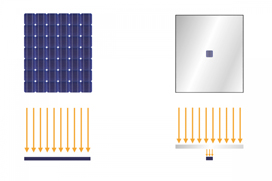 Swiss experts have come up with the idea of using an optical overlayer to focus the sun's energy onto high-performance solar cells. These cells are expensive, but the design, which is currently being lab-tested with a view to scaling up, means you wouldn't need many of them. Laurent Coulot, from Insolight, the company behind the concept explained: “It’s like a shower: all the water goes down one small drain, there’s no need for the drain to cover the entire floor of the shower."

Combined heat and power from the sun 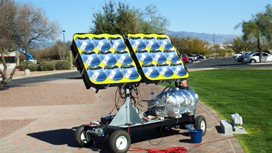 It's all about focusing with the Canadian 2-SOM system too. Here, concave mirrors concentrate sunlight towards efficient cells as part of a panel which mechanically tracks the sun. This is not just a solar PV system, though. A heat exchanger uses the high temperatures generated to heat water, making it suitable to provide for a home or business's electricity and warmth needs. 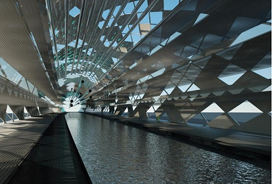 The Californian city of Santa Monica now boasts a truly unique structure off its coast – a shining silver tube that's both a salt water desalination device and energy generator. Its designers claim it can desalinate 1.5billion gallons of water a year, solely using sunlight, while generating 10,000 MWh of electricity. Though a big architectural undertaking, given it tackles multiple resource issues at once with an aesthetic edge, this is a design many coastal cities may well have their eye on.

Televisions remain the electricty glutton of the home

Mapping a solar-powered planet: how many panels would power Earth?

An old solution to a new problem

A Lancaster University student has gone back to the future in the hope of providing a reliable energy storage option. Abigail Carson has created a modern version of the flywheel, a technology that pre-dates batteries. It stores up kinetic energy through rotation, and this design goes twice as fast as what's currently available, while being 100 per cent recyclable. Definitely one for the traditionalists and the modernists to get behind.

Sweeping away the competition? 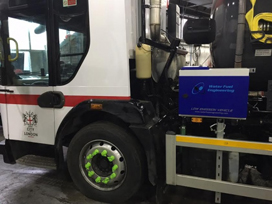 The world's first hydrogen hybrid road sweeper has just been launched at a conference in Birmingham. It's a Bulgarian design, using hydrogen technology developed at a Sofia armament factory in a new way, and claims fuel consumption savings of 15 per cent, and emissions cuts of up to 80 per cent. With towns and cities looking to tackle air pollution as well as waste, this is sure to be an idea worthy of further investigation.

What innovations have caught your eye? Let us know. Share your thoughts with us in the comments below, or tweet @EnergySvgTrust.

Researchers develop a polymer similar to that used in soft contact lens to boost the performance of super capacitors. (sc)

“This is a war on energy density,”

"If this only translates into something 10 times better, that’s still huge.”

“50 watt-hours would do general transportation"

It is difficult to find out

It is difficult to find out information that is unbiased. As a recent widow now living alone , I want to look at ideas for energy saving at home . If you contact firms that make solar panels or whatever I tend to be rather dubious as to their data and also do not want to be pestered by people trying to sell me things. I live on a hill in Yorkshire , in a semi detached and am trying to look at practicalities and cost of having solar panels on house of if there is a small enough and safe enough little wind turbine it would probably be worth having but I dont know where to find out this information. Is there a simple guide to such things without bias? I cant afford expensive mistakes so would be pleased to have any suggestions . I am a great recycler, compost maker etc , now need to add energy saver to my name!

Thank you for getting in touch.

Energy Saving Trust is independent and impartial, so the advice we give is all about helping you.

If you'd like to learn more about installing domestic renewable technology, we have content available that should be of use to you. You can learn about how to generate your own electricity or heat, whether with solar panels, wind turbines, hydro technology or a micro-CHP unit. Within our Publications, we have plenty of guides and factsheets available, too - use the search function to find reports, content articles and blogs on different topics. You can also learn about the installation of renewables in your home with our 9 helpful steps.

If you're keen to find out more, we would also recommend speaking with an energy expert at your local advice centre. They will be able to discuss what might be available to you, particularly any grants or schemes that may be of use. Call the Energy Saving Advice Service (ESAS) on 0300 123 1234. They're available from Monday to Friday, between 9am to 8pm. (Calls cost no more than a national rate call.)

We hope this is helpful and ensures the addition of 'energy saver' to your name soon enough.