Rollercoasters with a green twist 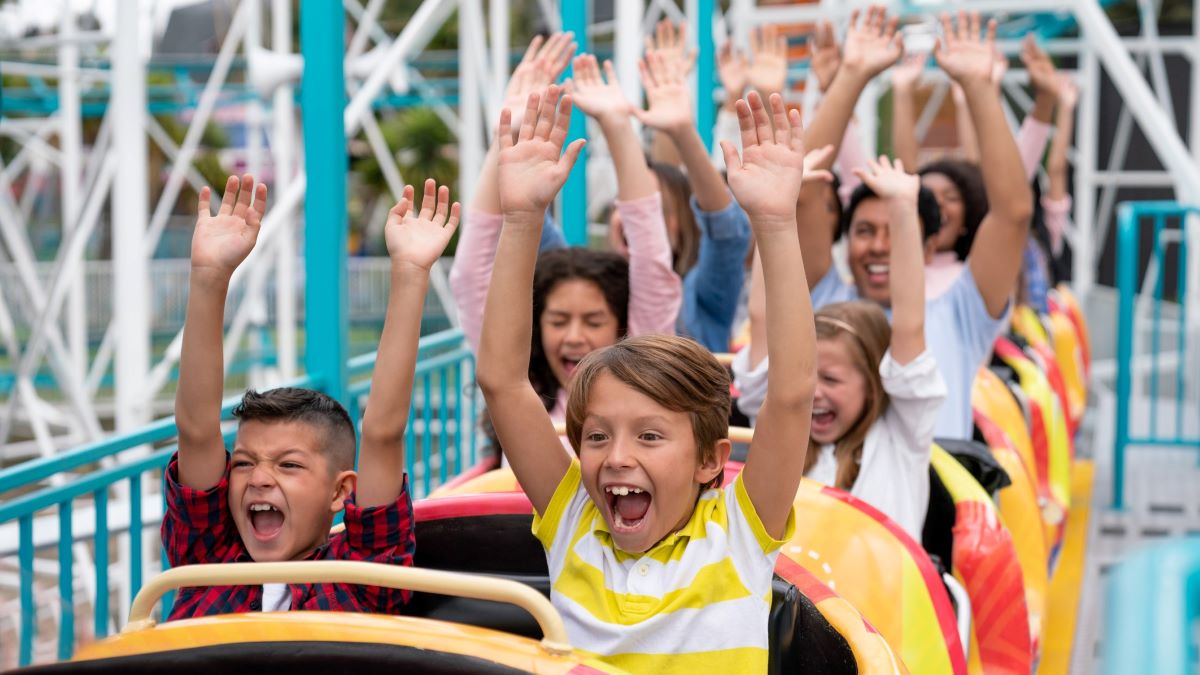 Putting the green in theme parks

Dreaming of sunshine? Aren’t we all! January is the busiest month for booking holidays. And when the summer (eventually) comes around, many of us will enjoy all the thrills and spills of a theme park.

Over 250 million people visited a theme park in 2018. But it’s not only the rides that are hair raising. The environmental impact of these attractions is just as alarming.

Think about the log flumes, slides and pools, using an enormous volume of water. Or the flashing lights and speeding rollercoasters, consuming energy with the same appetite as a T-Rex on the ‘Jurassic Park’ ride at Universal Studios.

And that’s before you consider all the hotels and restaurants spread out over the sprawling resorts, and the flights and car journeys that visitors take to get there.

Scientific evidence shows that the climate is changing due to emissions of greenhouse gases resulting from human activity, largely the carbon dioxide that’s emitted when fossil fuels are burned to generate energy.

So reducing the demand for energy is an essential part of tackling the climate emergency. But when it comes to theme parks, this doesn’t mean cutting back on the fun. Attractions all over the world are finding ways to offer eco-friendly entertainment.

“It’s kind of fun to do the impossible”

Walt Disney said those words long before the climate emergency became a burning issue. Today Disney is one of the largest entertainment companies in the world. In the can-do spirit of its founder, it committed to cut greenhouse gas emissions by 50% between 2012 and 2020.

Trains at Disneyland in California run on biodiesel made with used cooking oil from the resort’s restaurants, and a 22-acre 5-megawatt Mickey Mouse shaped solar facility has been installed at Disney World in Florida.

In 2019, Mickey was joined by a 270-acre, 50-megawatt solar facility. With over 500,000 panels, it generates enough energy to power two theme parks and reduce annual greenhouse gas emissions by 52,000 metric tonnes.

Closer to home, PortaVentura World in Spain has announced plans to build an 8.5-megawatt solar facility, claiming it will be ‘Europe’s largest self-consumption solar energy farm’. This means that the solar energy generated will be used on site at the theme park, supplying around 33% of its electricity.

In the UK, Alton Towers are taking simple steps to reduce energy and water consumption, from installing LED lights throughout their site, to using sensor taps and efficient showerheads in their hotels.

But it’s the smaller attractions that are leading the way in sustainability. Greenwood Forest Park, for example, boasts the UK’s first ever solar powered ride. SolarSplash  sends thrillseekers shooting down spiral tubes flowing with water, using energy from a 150-kilowatt solar facility to power its conveyor belt.

Scream if you want to go greener

So will there ever a theme park that’s 100% powered by renewable energy, or 100% carbon neutral? Some argue that the very business model is environmentally damaging, with theme parks marketed as glittering destinations and visitors persuaded to make long trips in planes and cars.

According to The Guardian, the greenhouse gas emissions from Europeans flying to Disney World in Florida are roughly equivalent to the annual emissions of the population of Ethiopia.

For theme parks, achieving sustainability is going to be a rollercoaster ride. And like many industries, the fastest progress will probably come when companies see the threat to their bottom line.

As eco-conscious consumers decide where to visit based on the size of its carbon footprint – not just the height of its rollercoaster – then theme parks will need to go green or get left behind.

This could lead to some innovative attractions, where sustainability isn’t just ‘retrofitted’ by upgrading to LED lights, but embedded into the design.

Like DefiPlanet, a nature-themed attraction in France, where families can embark on fantastical adventures while learning about the very real dangers of climate change.

Or the concept for a wind farm theme park in Holland, with turbines transformed into helter skelters. Although it never made it off the drawing board, this eye-catching attraction might offer a glimpse into where we will one day be spending our summer holidays.

With industries racing to tackle the climate emergency, theme parks are joining the ride. Hold on tight.