A case study on Jason Falconer's experience of using ecargo bikes to teach cycling and orienteering across Dorset.
All Case studies

Jason Falconer has been delivering active travel projects for schools and families across Poole, Dorset since 2009. After previously working full time as a schools officer at Sustrans, Jason has always focused on leading by example and would regularly use his bicycle for school visits, training and event management. 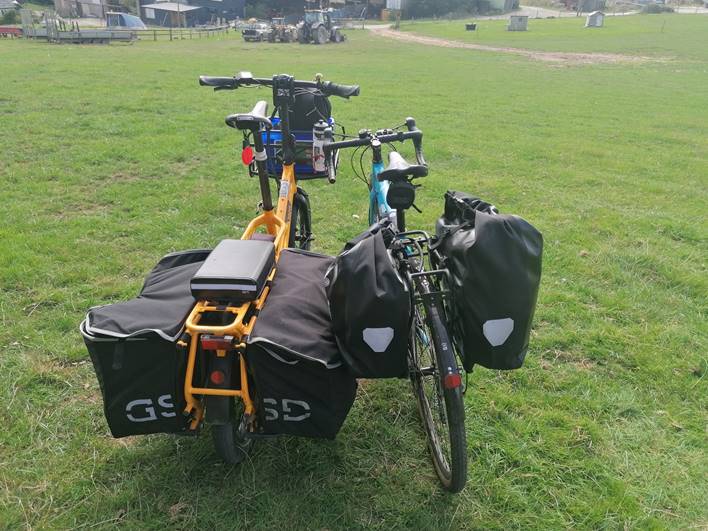 Cycling is the core of Jason’s business, so it was only a matter of time before he decided to switch from a pedal bike to an ecargo bike. Since successfully applying to the eCargo Bike Grant Fund, Jason has been enjoying the electric power assist of his new Tern ecargo bike, which has been a particular benefit to him on long journeys or travelling through woodland areas.

The application process was straightforward and coincided perfectly with Jason’s growing business. Along with the £800 he received from the eCargo Bike Grant Fund, Jason used £1,000 which he recouped from selling his previous bike to finance his new £5,000 Tern ecargo bike.

eCargo bikes are a sustainable alternative to petrol and diesel vehicles because they have zero tailpipe emissions. Since April 2019, Jason has covered 7,261 miles on his ecargo bike, resulting in 16.8kg of carbon dioxide (CO2) emissions solely from electricity generation. This compares to 1,946.8kg of CO2 emissions if the same mileage was undertaken by car, or 2,866.1kg by van.

Switching to electric has been a cost-effective decision for Jason as he would have incurred fuel, servicing and repair costs totalling £3,081 if he had been using a motor vehicle during the same period. Over the last 18 months, Jason has spent £521.99 on maintenance costs for his ecargo bike due to heavy usage and long distanced journeys. The 200kg carrying capacity of his ecargo bike has made it much easier for Jason to carry his coaching kit, timing equipment and bike maintenance tools.

The power assist of the ecargo bike has left Jason feeling much more energised for his work. Jobs that may have seemed a little too far previously have been made easier with the battery capacity of the Bosch 500 and Tern ecargo bike.

Since receiving his ecargo bike, Jason has been contracted to work on a new project at Durlston Country Park. The project requires 10 journeys for map surveying, meetings, installation of courses and checks before a public launch. A 22-mile return journey from Poole to Durlston via Sandbanks Ferry costs £2 per trip and £20 for 10 journeys prospective on Jason’s ecargo bike. In comparison, a 40-mile return journey via Wareham would cost £18 per trip and £180 for 10 journeys prospective to complete the journey by car.

"It’s truly back to the future for the bicycle. If, like me, you want to lead by example on active travel, then an ecargo bike will give you the platform to do that, get healthier and save you money too." Jason Falconer Head coach, Cycling Coach Services

To find out more about ecargo bikes, visit our advice page, or drop us an email via the button below.