Find out how Fruit 4 London has made significant cost savings and emission reductions nine years after their electric van journey began.
All Case studies

Fruit 4 London has specialised in sustainably delivering fresh fruit, vegetables and other produce to offices and homes in London since 2008. The company first switched their small fleet to electric vans in 2012 and haven’t looked back. Read on to hear Fruit 4 London’s journey, observations and top tips from operating electric vans for nearly a decade.

Moving on from first generation

Fruit 4 London’s electric van journey started with the purchase of two Renault Kangoo ZEs in 2012 and specifically designing fruit boxes to optimise the space available in the vans.

Nissan approached Fruit 4 London in 2014 to test an eNV200 electric van for eight weeks. Although the company found the eNV200 to be too small for their needs, it did offer a better driving range. Gradually, Fruit 4 London sold their Kangoo fleet and transitioned to a fleet of seven Nissan eNV200 XL models, which are converted with an extension to their cargo space. This provides an improved capacity of 8m3 at a payload of 580kg. Fruit 4 London again redesigned their boxes to fit the maximum number possible in the van.

Another reason for moving away from the Kangoo vans was that while the vehicle was purchased, at the time of ownership, the battery had to be leased. This resulted in complications with insurance following an accident and when reselling the vehicle.

Fruit 4 London sold the first Kangoo van after six years of use and a mileage of 45,000 miles. There were no issues with the vehicles themselves even after six or more years of use, although the range of the vehicle dropped from around 100 to 75 miles.

Electric vans have saved Fruit 4 London £2,625 a year on the London Congestion Charge, based on entering the zone five days a week on autopay. 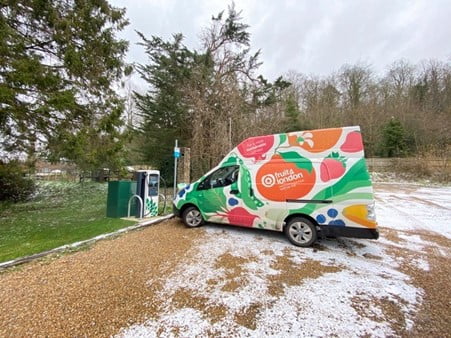 Drivers have found electric vans to be a more relaxing experience than driving a petrol or diesel vehicle. The vehicles are quieter and have few driving controls as they are automatic, leaving the drivers calmer and better able to focus on the traffic.

The financial savings from switching to electric vans have been substantial. On top of saving thousands each year from not having to pay the London Congestion Charge, the electric vans have required minimal servicing and repairs as they have fewer parts; a sharp contrast to their diesel vehicle, which required considerable repair work. One of the six-year-old vans Fruit 4 London sold hadn’t required a brake pad change since new. 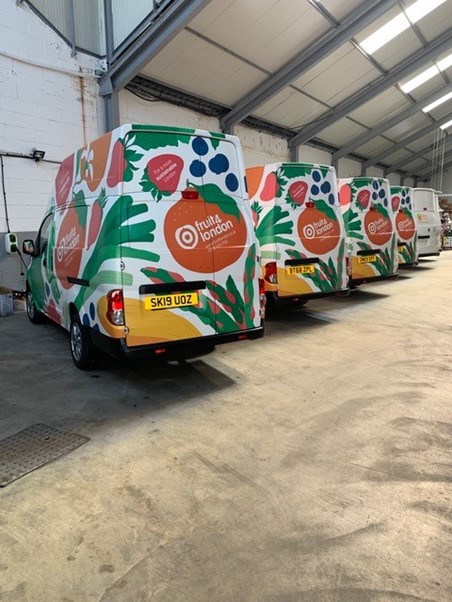 Fruit 4 London’s delivery vans initially did short journeys of 30-60 miles, although moving base to outside of London has added around 15 miles each way to the journeys. The vehicles are charged mostly at base.

The first chargepoints Fruit 4 London bought for their vans were 3.6kW – the maximum power the Renault Kangoo vans could use at the time. They have since upgraded to 10 7kW chargepoints at their warehouse and have observed the price of chargepoints fall dramatically over the years.

Vehicles are plugged in to charge overnight from around 10pm to 3am, ready for the first delivery shift the next morning. They have an Economy 7 electricity tariff, which offers cheaper electricity when electricity demand is low, such as overnight when the vehicles are charging.

Occasionally, Fruit 4 London have undergone much longer journeys during which the vehicles needed to be charged en route. They have noticed that the public charging network has expanded considerably, from 2,800 connectors in 2012 to over 36,800 in January 2021[1]. The user experience of the network has also improved, with the majority of chargepoints being accessible without any membership or subscription – you can just plug and pay.

Fruit 4 London’s advice on charging is to be opportunistic. Small top ups of charging can often be easier to incorporate into the working day than one longer charge. For example, the company can get over 40 miles from 10 minutes on a rapid charger while in London. For long journeys, plan several short breaks, such as for a coffee, to be taken where there is a rapid charger.

“If you have to be stationary for a while, it’s best to utilise that time charging, even if the chargepoint is five minutes out of your way.” Laszlo Mulato, managing director at Fruit 4 London

Since 2019, Fruit 4 London have been involved in Innovate UK funded Vehicle to Grid (V2G) technology trials. V2G technology allows electric vehicles to not only draw electricity from the national grid but also supply electricity back to the grid at times when electricity demand is high, generating revenue. This technology is currently only available on CHAdeMO charging capable vehicles and was another reason Fruit 4 London chose to switch their fleet to Nissan vehicles.

As part of the trial, Fruit 4 London will be installing six or seven V2G 22kW chargepoints at their warehouse. This will require a new electricity supply and they are working with their distribution network operator (DNO) to do this. They will also be transferring to a half hourly electricity tariff to maximise the financial savings.

Fruit 4 London hope to install solar photovoltaic (PV) panels on their warehouse roof to generate renewable electricity for their vehicles, which can be sold back to the national grid. They would like to replace their large diesel van with an electric version, as and when larger electric van models come to the market, making their fleet 100% electric.

Since March 2020, the Covid-19 pandemic has meant Fruit 4 London’s business has shifted from delivering to offices to delivering to households, but they hope to be able to welcome back their office customers in the near future.