The university is lowering carbon emissions by converting its fleet of vehicles to electric.
All Case studies

Two thirds of Manchester Metropolitan University’s (Manchester Met) fleet are low carbon as of February 2021. The university has been downsizing and transitioning its fleet since 2014.

Manchester Met’s six electric vans are versatile and used by a variety of departments for different purposes. Two Nissan eNV200 vans are used by the post and print department, covering 20 miles a day on average to different pick-up and drop-off locations. The security department uses another eNV200 passenger vehicle with seven seats, while the catering department uses an electric Renault Kangoo. There is also an Aixam electric van, which has been used for grounds maintenance purposes.

In 2019, Manchester Met commissioned Vic Young to provide a conversion for an existing eNV200. The carriage works included the provision of a larger capacity cargo area and roller shutter doors. The facilities department regularly use a van for moving furniture around sites, so capacity, instead of payload, was the primary concern. The converted electric van not only met the department’s needs but also replaced one leased diesel van. The box van averages around five miles a day, as the university’s campuses are a maximum of three miles apart. Over the past 10 years, the university’s estate has been simplified and made more compact, allowing Manchester Met to downsize its fleet. 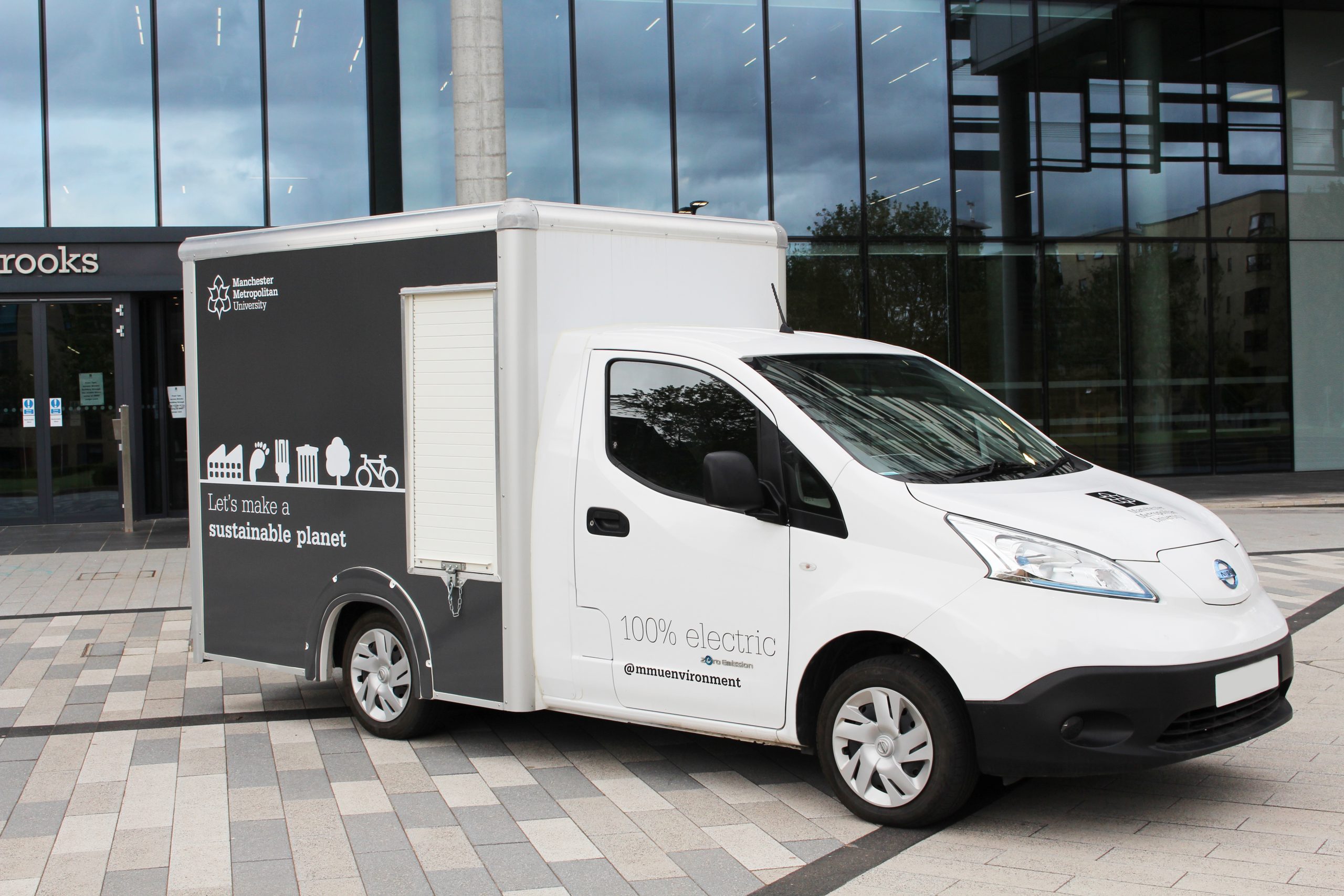 Manchester Met has installed 16 chargepoints across its campuses, capable of charging up to 31 vehicles at a time. The electric vehicle drivers mostly use the 7kW chargepoints, although there is also one 50kW rapid chargepoint. Five chargepoints are dedicated for use by the university’s fleet, while the rest have been made available to staff and students.

Looking ahead, the university is considering installing another rapid chargepoint, smart charging units and vehicle to grid (V2G) capable chargepoints. V2G technology will allow the electric vehicles to supply, as well as use, electricity from the grid in a way that could reduce grid costs by supplying electricity when demand is high.

Manchester Met has a longstanding commitment to sustainability so the substantial carbon savings from switching to electric vehicles was a driving factor.

However, it is crucial that electric vehicles meet the needs of the business and for the transition to an electric fleet to make financial sense. The university found it is as cheap, if not cheaper, to drive electric. Alongside fuel savings, one noticeable cost saving has been in maintenance. Most of the electric vans were bought in 2016, but careful use of the vehicles means that the only part that needs replacing regularly is the tyres.

“If the finances stack up for these vehicles, then you’re pushing at an open door to get stakeholders on board and behind the wheel”. 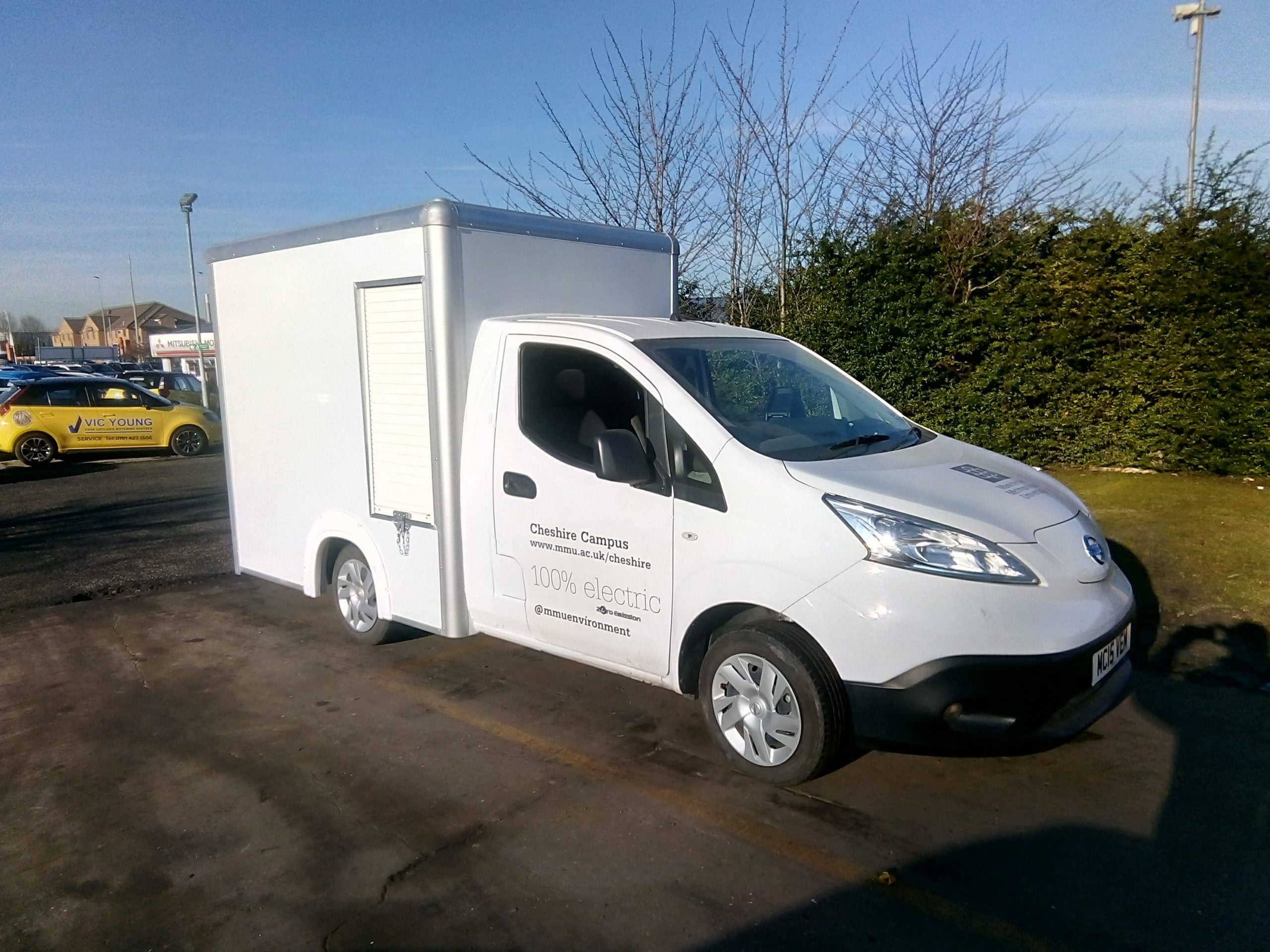 As well as success with electric vans, Manchester Met has found that its five Nissan Leaf electric pool cars also meet the needs of the university and have minimal maintenance costs. The cars have been part of the fleet for over five years and in that time have only needed replacement tyres. The vehicles have 24kWh or 30kWh batteries. Thanks to advances in technology, if the university was purchasing in the current market, it would opt for the larger 60kWh vehicle battery now available to give them greater driving range.

Manchester Met recommends that there is one person responsible for managing the whole fleet, rather than vehicles managed by individual departments. This approach helps reduce risk, as fleet utilisation and maintenance checks, for example, can be better managed.

However, in a small organisation there is no need to have a person dedicated to fleet management; it is manageable as part of someone’s existing role. This can be supported by online fleet management tools that efficiently integrate fuel card data and MOT reminders, which can be a worthwhile investment for small businesses.

With a possible Clean Air Zone to be introduced in Manchester, the university wants to ensure that all its vehicles are compliant. This would mean transitioning vehicles that have proven more challenging to convert to electric, such as the van used for field trips, which may be driven on tougher terrain. However, Manchester Met is confident that it will be able to transition these vehicles to low carbon options in its next vehicle procurement cycle as well.

“I don’t have to think about the electric vans, they just work.”

Visit Manchester Metropolitan University to find out more, or explore the university’s work on sustainability.