The Energy Saving Trust Foundation partnered with the Pod to deliver several campaigns to young people about energy saving and climate action.
All Case studies

The Energy Saving Trust Foundation partnered with the Pod during 2021-22 to deliver several campaigns to young people and their families about the importance of energy saving and climate action, aimed at the Pod’s network of over 17,000 schools.

With Glasgow hosting COP26 in November 2021, climate change was at the top of the news agenda and the partnership provided an opportunity to reinforce the link between saving energy and climate change, as well as drive long-lasting behavioural change among young people and their families.

The Energy Saving Trust Foundation provided the Pod with advice, information, and support for the creation of energy saving facts, statistics, and tips, which became an integral part of the campaigns. It also helped to deliver marketing and communications activities, particularly across existing Energy Saving Trust channels, to drive awareness of the partnership and to recruit participants for each campaign.

Katy Newnham, founder of Wastebuster: “It has been fantastic to have the support of such a well-respected, impartial and trusted organisation as the Energy Saving Trust for our energy-saving campaigns on the Pod. We believe that together with the Energy Saving Trust Foundation we can drive considerable positive change to help create a zero-carbon society.”

A wide range of new resources were developed to support the launch of the campaign and encourage young people’s interest in climate change. Alongside curriculum-linked learning materials – like lesson plans and an assembly – we created a new Pod Energy Saving Dashboard for schools to measure the energy, carbon and financial impact of their Switch Off Fortnight campaign.

We were able to track the cumulative environmental impact of the campaign – with schools saving an impressive 109,000 kWh of energy over the two-week period. 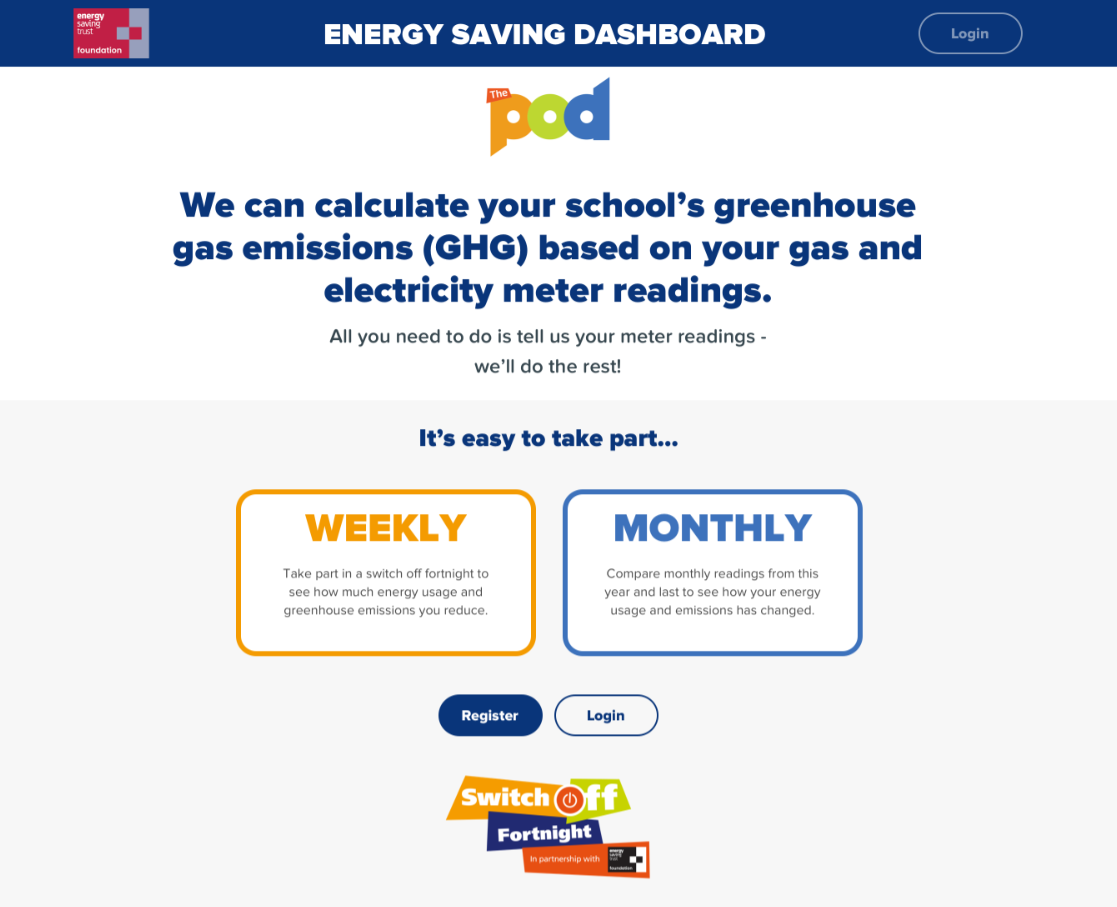 The Switch Off Fortnight campaign’s established network and the Pod’s relationship with its existing audience grew with support from the Energy Saving Trust Foundation.

A total of 1,332 UK schools joined the 2021 Switch Off Fortnight campaign, a 50% increase in participants from the previous campaign. Around 80% of participating schools were primary schools, while the remaining 20% were secondary schools. A total of 1,060 schools in England took part, with a further 113 schools in Scotland, 74 in Northern Ireland, 66 in Wales and the remainder from overseas.

To recognise the commitment of a core group of ‘super’ schools, we launched a new Switch Off Fortnight Ambassador Schools programme too, which helped us to amplify and extend the reach of the campaign.

“It was great fun and engaged students in taking part in small changes to create big impacts and also seeded a whole school community action.”

The new websites – Pod@home, Climate Activist Bootcamp (for ages 11-16), and Climate Champions Club (for ages 4-11) – will be live later this year and will help embed the energy saving message in the homes of students and their families.

Pod Energy – the new online resource and dashboard that allows schools to record meter readings and savings – is important for enabling real-life learning for young people. Helping students to visualise energy savings from small actions is a huge step toward achieving wider understanding of the positive impact that changing behaviour can have.

We hope that the suite of Pod For Homes websites will act as the go-to-place for young people to find relatable information on how they can save energy and make a positive difference.

The Foundation welcomes new board member and celebrates campaign success

Engaging youth with the climate emergency at COP26 and beyond