Mind the gap? The curious case of the ‘Future support for low carbon heat consultation’ and the missing millions

This is the first in a series of two articles on the UK Government’s planned support for low carbon heating in homes from 2022 to 2024. The missing millions we refer to highlights the reduction in financial support at a time when, in our view, we need an increase.

On the day the UK Government consultation on the future support for low carbon heat closed, the UK Government set out a £2 billion stimulus package to boost jobs by investing in energy efficiency, including potentially heat pumps.

So have we found the missing millions?

We don’t think so. While the new Green Homes Grants are very welcome, we need a longer-term approach to provide stability for the sector to scale up.

The UK Government has just set out a new approach to supporting the take up of low carbon heat in homes and small businesses (Future Support for Low Carbon Heat). Under these proposals, the current scheme (the Renewable Heat Incentive) would continue until March 2021. It would then be replaced by a new two-year, heat pump focussed scheme. This would support up to 25,000 heat pumps via grants of £4,000.

While we welcome the switch to an upfront grant and a simpler approach, our view is that the scale of the proposed scheme is completely inadequate for the post-Covid recovery and net zero target.

Scaling up the heat pump sector is vital for achieving net zero – and presents both a challenge and an opportunity. Regardless of the future role of green gas for home heating, there are over 4m homes now using oil, coal, LPG and less efficient electric heating, where we could install heat pumps. The need for a green post-Covid stimulus has only increased the stakes here, with a former deputy Governor of the Bank of England, Sir John Grieve, citing a major ten-year ‘boiler replacement project’ as a top pick for a pick for a higher wage, higher skill and higher productivity recovery.

Support now is vital to ensure that the sector can grow appropriately to deliver for the new build market at scale by 2025. While the consultation paper accurately diagnoses many of the issues, the proposed support would leave a big gap. A £1 billion, 4-year scheme, with a stronger scrappage element to make the most of the financial and environmental impact would be a better fit here.

What scale of heat pump uptake do we need by 2030?

In their latest annual progress report, the Government’s advisors, the Committee on Climate Change, (CCC) said there was a need to support the heat pump sector on a steep growth curve, from 27,000 units in 2019 to one million a year by 2030.

This reinforces their 2015 assessment that by 2030, we need an installed base of 2.3m (at minimum) or, with further ambition, 3.3m heat pumps by 2030.[1]  As the UK has since passed a more ambitious net zero target, the higher 3.3m target feels more appropriate.

The chart below shows what a 1 million a year capability by 2030 could look like. 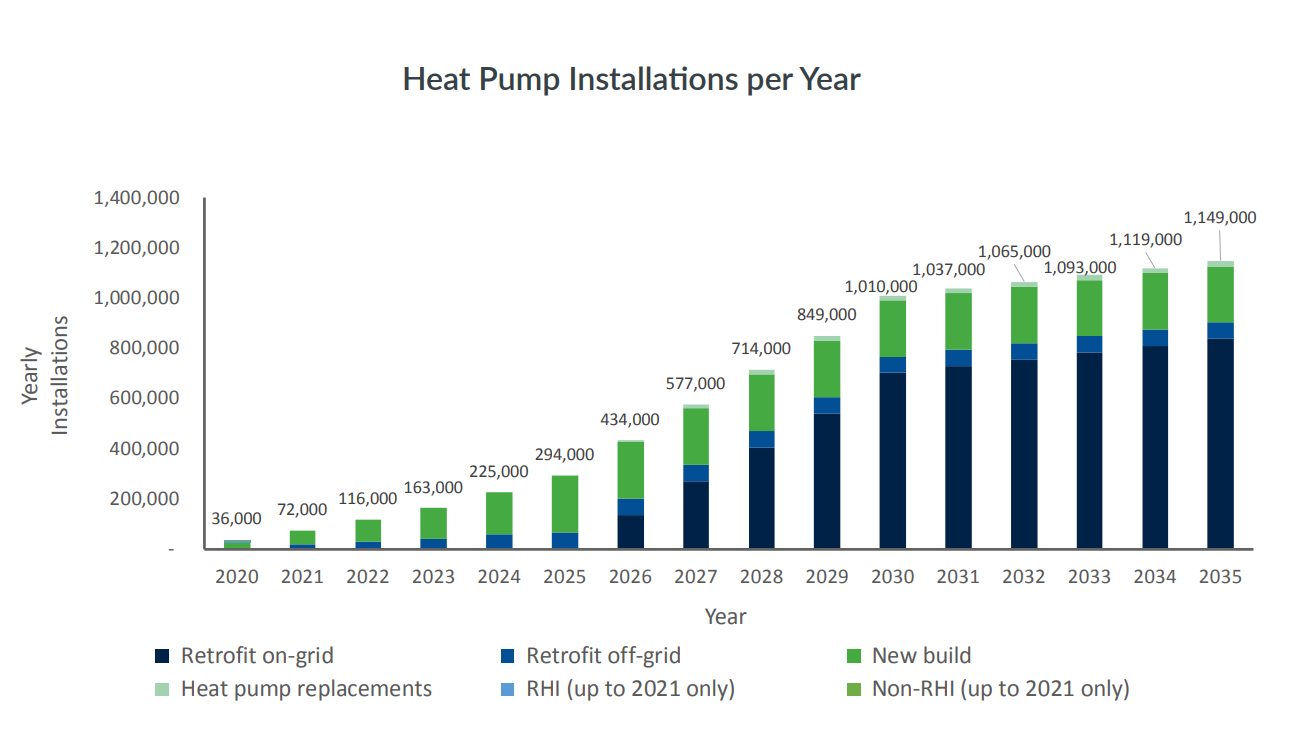 How could this target be met?

About half could come from new build, where the installation cost is much lower and where, even if the cost is passed on, buyers will gain from the lower bills. This is why the government has proposed making heat pumps the default option in new build from 2025[2] with an interim uplift to the building regulations to encourage take-up from 2020. It is important that this change is confirmed as soon as possible to allow supply chains to adjust. Delay here will increase costs.

While new build will be the lowest cost route to growing the supply chain, about half the target would need to come from retrofitting existing stock. The priority here would be older boilers in the 1.5 million homes using high cost, high carbon fuels such as oil, LPG and coal. There is further scope in the 4m+ homes using direct electric heating, such as older storage heaters for example.

Around 85% of UK homes are on the gas network. It may be some years before we are clear what ‘future heat’ looks like here. The options include heat networks for up to 5m homes in dense urban areas; electric heat pumps; low carbon gas boilers and hybrid (gas/ electric) systems – or different combinations in different areas. Whilst hydrogen could be widespread, it could play more of a ‘Heineken’ role, refreshing parts ‘that electrification cannot reach’.

So while there are questions about how on-gas might work, there is a good degree of consensus on heat pumps in new build and off-grid homes. The CCC are clear that the more we push back work here and elsewhere in the net zero journey, the higher the eventual costs will be. Here this could include stranded assets – replacing heating systems before the end of their useful life.

A clear phase out date for fossil fuel heating – parallel to the phase out date for petrol and diesel cars would avoid this, while giving a clear signal to individuals and the market on the direction of travel. The 15-year lifetime of conventional boilers suggests that 2035 is the latest date this should be set. This would need to be matched by a very rapid growth in low carbon alternatives, to ensure they can meet this demand from 2035 (1.7m gas boilers were sold in 2019).

How many heat pumps are installed now?

Currently less than a quarter of a million of the UK’s 29 million homes have heat pumps. Last year 27,000 were installed – in stark contrast to the 100,000 additional homes connecting to gas and the 1.7 million replacement boilers.

So after six years of support designed to ‘prepare the market for mass roll out in the 2020s’, heat pumps account for less than 2% of the market.

Based on this, the Domestic Renewable Heat Incentive (RHI) programme has not been a success. In 2016, the CCC said that the market had ‘flat-lined’. While there has been some improvement, sales now are only a third higher than before the introduction of the incentive[3].

In 2018, both the Public Accounts Committee (PAC) and National Audit Office (NAO) investigated the scheme, with the PAC concluding that the RHI ‘does not work for households and businesses unable to pay the high upfront costs of renewable and low-carbon heating equipment’ and that the NAO that it would deliver just 22% of the measures forecast.

This disappointing take up of heat pumps suggests that we need to urgently reconsider both the support mechanism and the wider environment.

Heat pumps are widely deployed in other parts of Europe. In Norway for example, over one third of households have heat pumps and they account for 95% of new heating. France and Sweden have 2m and 1.7m respectively. 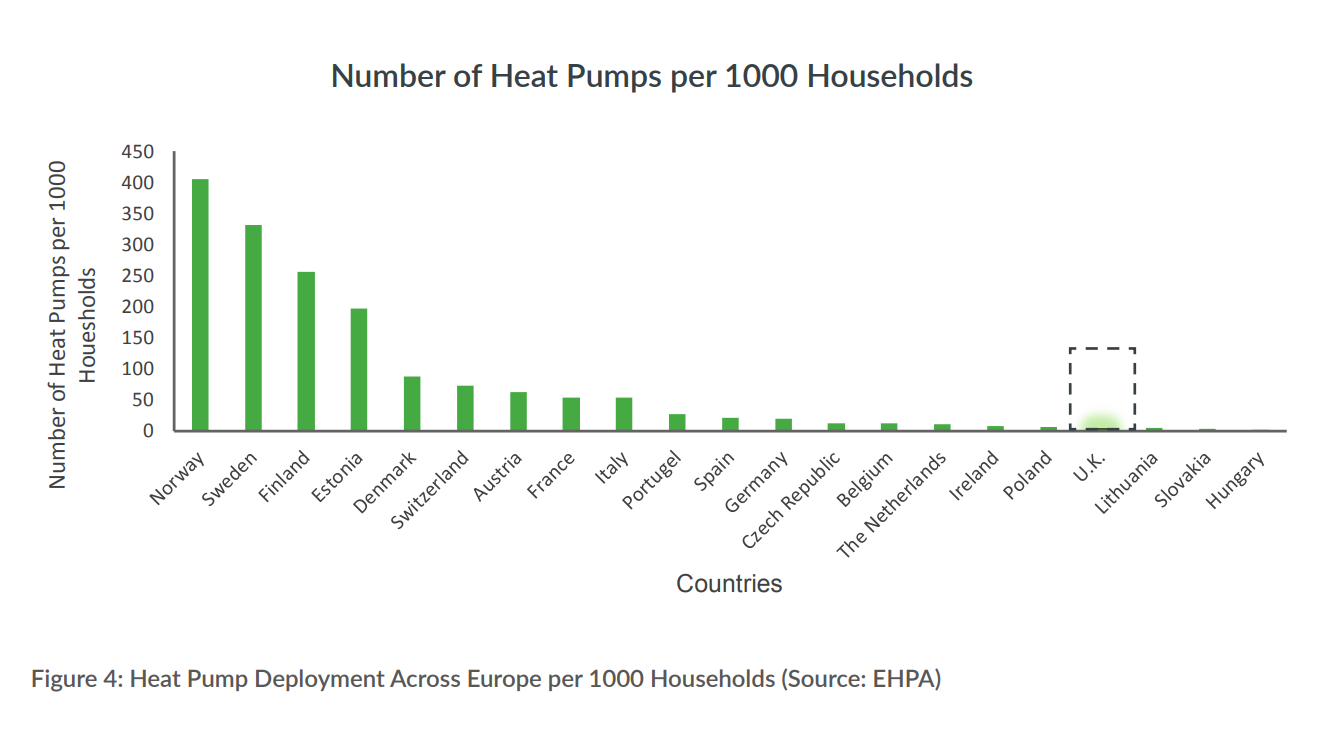 Why we need more (not less) intervention.

Heat pumps could be sold in a similar way to mobile phones – with customers paying off the capital cost over an agreed period through a monthly fee bundled in with their usage. This heat as a service model avoids the high upfront cost; the hassle of managing the process and reduces risk for the individual (customers would buy an agreed level of heat, with the onus on the vendor to ensure that the measures are optimised for the home and the customers supported to use the technology effectively).

The commercial potential here was signalled recently when Centrica, owner of British Gas, made the news calling for support to quadruple heat pump numbers by 2025.

If heat pumps are to account for a higher than 2% share of the heat market, we need more rather than less government intervention.

The proposed fund of £100 million represents a two thirds reduction[4]  in the support and, quite simply, is insufficient to do the job set out for it. A much larger fund of £1 billion allocated over four years would be better aligned to the consultation’s objectives. This could support up to 250,000 heat pumps, doubling the total numbers.

This would fit better with the CCC’s assessment that we would need £1.5-2.5 billion a year for a rollout of energy efficiency and low-carbon heat through the 2020s. This estimate is for the UK as a whole and does not include the additional funding required for fuel poor households.  The carbon saving from a £1 billion scheme would be equal or higher to the biomethane scheme set out in the other part of the consultation, for which up to a £2.8 billion has been proposed.

Clearly, additional funding for anything is difficult right now. But, as Sir John Gieve highlighted, a focussed push of heat pumps would meet his criteria for a productivity-focussed stimulus.

When implemented alongside wider measures, such as reducing the cost differential between heating fuels and regulation or an emissions standard for replacement heating in off-grid homes, this scale of fund could transform the sector.

[4]  Based on the RHI forecasted spend for 2020/21 from https://assets.publishing.service.gov.uk/government/uploads/system/uploads/attachment_data/file/889663/RHI_budget_cap_publication_-_data_to_end_of_April_2020.pdf