How has Covid-19 affected people’s attitudes to home energy in Scotland?

Please note that this page contains information and links most relevant for people living in Scotland.

Energy Saving Trust identified a need to look at how the Covid-19 pandemic has influenced people’s feeling about home energy use and how they can save energy at home.

The following report outlines the findings of the research and includes relevant graphics to support and contextualise the narrative.

About the research and the people who took part

A comprehensive list of questions was provided by Energy Saving Trust and an online questionnaire was devised by TMcK Research Ltd, comprising primarily a range of questions with pre-coded answers, as well as some questions requiring a verbatim response.

On average, the time taken to complete the online survey was 10 minutes.

Who did we ask?

A total of 2,013 Scottish respondents completed the survey between 23 March and 1 April 2021. All were aged over 18, resident in Scotland and either a leaseholder or owner-occupier.

Quotas were also set to ensure a spread of gender, age, socioeconomic group and geographical location. See appendix for details of the sample.

Part 1: How do people use and pay for energy?

Over half (54%) claimed they do not currently have any green measures installed in their home, with the most common technology being a smart meter (35% of respondents use one).

The majority (61%) believed that their energy bills were average for the type of property they live in, though just under 1 in 5 (18%) claimed to be paying above average on their bills.

In fact, the average energy bill recorded was £116.63 a month, which is above both the Scottish and UK average. According to UK Government data, in 2020 the average annual energy bill in Scotland was £1,274, or £106 a month. Over a third of those surveyed are spending over £130 per month – significantly above average.

These high costs may be because nearly a quarter of people currently aren’t paying for their energy using the cheapest method of direct debit payments. 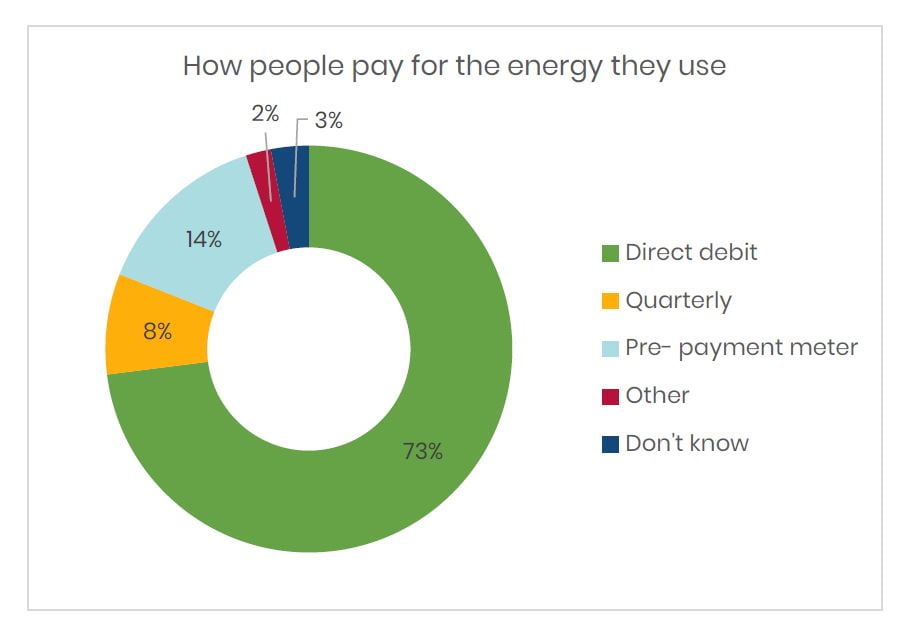 Do people identify as being in fuel poverty?

Our research found that of the 316 people who claimed to be living in fuel poverty, almost half (46%) attributed this to Covid-19 lockdown.*

*We allowed respondents to self-identify with the term fuel poverty based on the definition of a household spending 10% or more of total income on energy costs.

Part 2: How has Covid-19 impacted energy use?

The Covid-19 pandemic has had a significant impact on energy consumption, with 61% of Scottish residents claiming to have used more energy this year due to the pandemic. This has resulted in energy bills rising by an average of 15%. 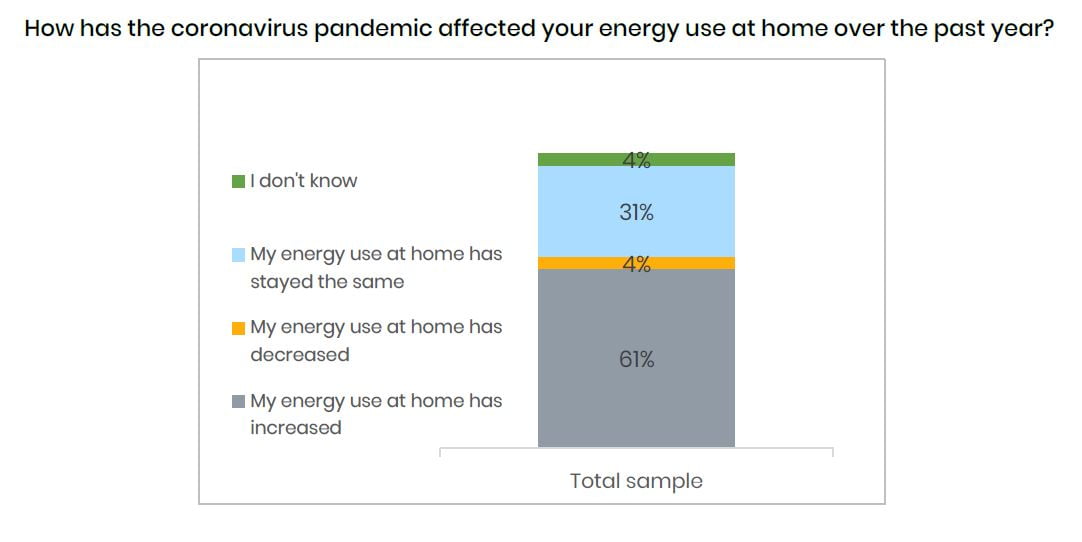 For most people (59%) bills have increased in the past year – hardly surprising given that so many people spent more time at home. For those working at home, the cost of using IT equipment as well as daytime heating and lighting during winter will have increased usage significantly.

Part 3: How has Covid-19 affected people’s attitudes to saving energy?

People have become more aware of their energy usage and rising bills costs, which has made them more willing to try to reduce how much energy they use at home by adopting energy saving measures and carrying out home improvements. But few people have already acted on that, with less than a fifth claiming they’ve made energy saving home improvements to their home.

For those who claimed they had acted, turning off appliances when not in use was cited as the most popular way of saving energy, followed by closing curtains and blinds, choosing low energy bulbs and setting heating controls properly.

Clarity on what bill savings could be achieved would be the primary motivation for increasing or adopting energy saving behaviour in the home for those who have not already done so.

Making improvements to the home

Of those who have been prompted to make energy saving improvements due to Covid-19’s impact on their energy bills, 45% claimed to have installed new energy saving appliances, followed by 30% who have insulated their home.

A clear understanding of the financial and environmental impact of energy saving home improvements was listed as the most motivating factor to make changes, closely followed by funding to help cover the cost.

Other important themes here are trust – the public sees value in clear and impartial advice as well as being able to find a trusted installer. 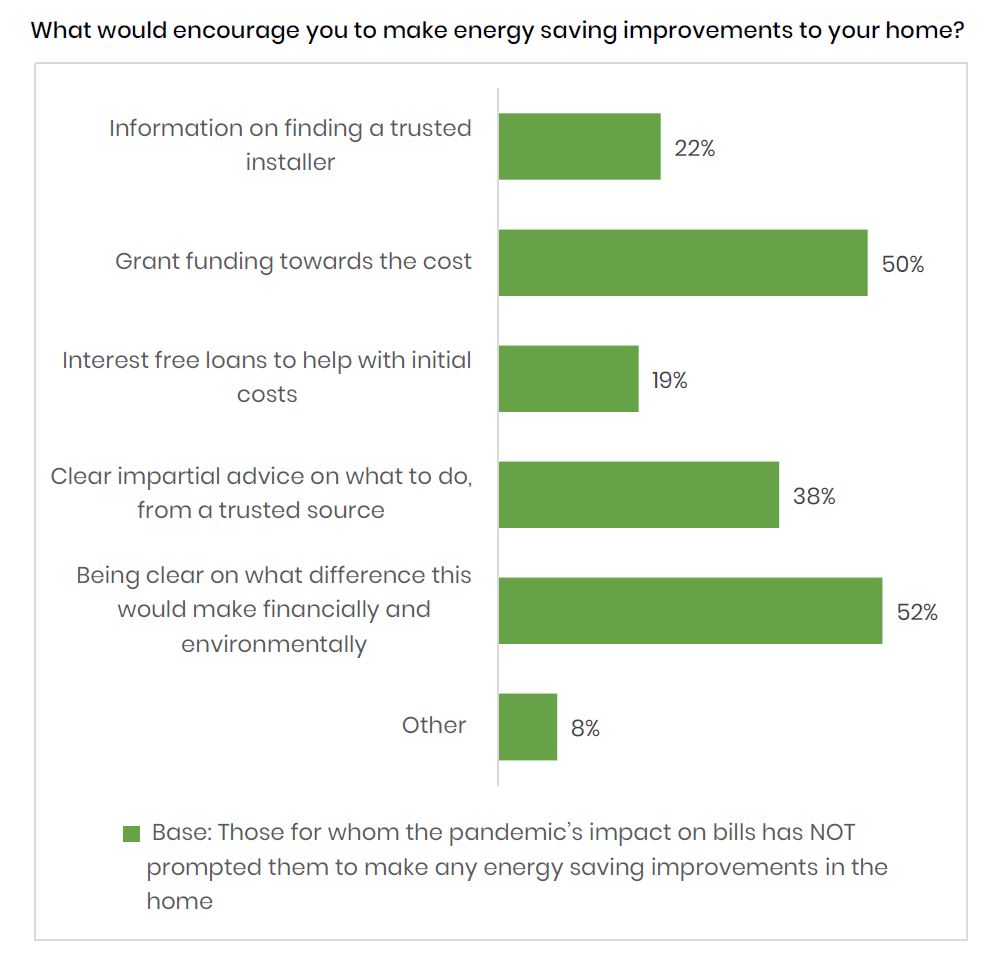 Fewer than 1 in 3 (30%) are aware that there is financial support available in Scotland to help people make home energy saving improvements.

Overall, 17% of people in Scotland searched for advice or information about energy saving in the last year, while just over half (51%) have taken at least one meter reading during the same period.

Part 4: Further insights from our research

It’s clear that home energy use and energy saving are among the many household matters affected by the Covid-19 pandemic. As our domestic and work arrangements have changed drastically, so has our awareness of the energy we’re using and paying for.

Households know they’re using more energy and are aware they’re paying more too; many of the people we spoke to were paying well above average for energy, often as a direct result of the pandemic.

It is encouraging to see so many people recognising what they can do to take action and reduce their energy consumption, and therefore bills, although the steps identified would normally have a fairly small impact on usage and annual costs.

However, it is clear that people need support when it comes to understanding how to significantly reduce energy consumption, and what the costs and benefits will be in doing so. Additionally, awareness of the financial support available is fairly low, so it’s important that public engagement, such as the Let’s do Net Zero campaign by Scottish Government, continue their work in raising visibility of the services available.

As this research shows, the public have an appetite to engage with messaging around home energy efficiency – more so because of the impact of Covid-19.

Energy Saving Trust continues to work in Scotland, the UK and internationally to address the climate emergency, recognising the need for insight from research to power and drive change at policy level and in practice within industries and markets.

Thanks to the team at Taylor McKenzie for conducting this research and to the Home Energy Scotland team here at Energy Saving Trust for project support.