Decarbonisation of heat – a crossroads

Tackling emissions from heating is vital. At 37%, heating accounts for the largest proportion of UK greenhouse gas emissions. About 90% of UK homes use gas boilers, which for a long time have been accepted as a comparatively efficient and convenient heating source.  However, policy makers and researchers are now strongly focused on how we can move to lower carbon heating systems for our buildings.

The picture of the available options is rapidly changing, with major technological developments and alternative sources of energy emerging over the last 10 years. The government faces a tricky decision around how to move forward in a cost effective and manageable way. Currently, the choices are around district heating networks working with Combined Heat and Power, electrifying heat or ’greening’ the gas grid. There’s even a lively discussion about the large scale extraction of heat from the water in old mine-shafts. 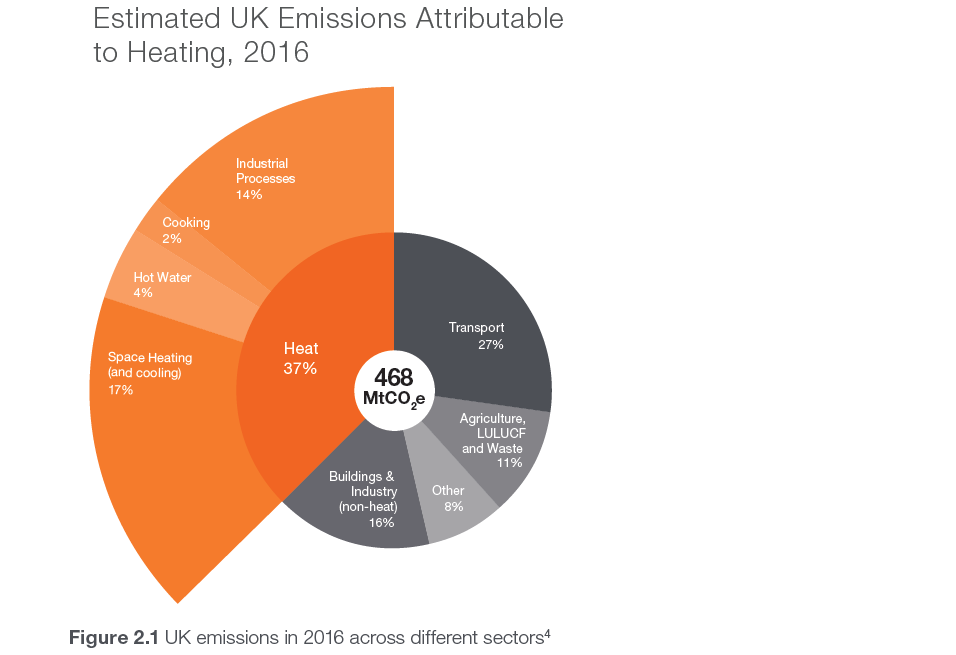 Greening gas (using bio methane or hydrogen) is an interesting idea – but it’s not straightforward. There are different possible strategies, with the use of biomethane (blended with conventional gas) or conversion to hydrogen being the front runners.

Unfortunately, it’s not clear if either will necessarily deliver significantly lower emission gas, without also costing a lot of money. There’s also a lack of real world evidence as to how it might be rolled out safely and successfully at this time. Delivery of significant benefits much before 2030 seems a tall order, given the amount of work required, which would involve significant changes to the network itself and maybe to individual boilers.

Decarbonising heating through electricity seems more likely to be realised in practice.  As things stand, electricity has a slightly higher carbon content than gas, when used for heating. But we’re making huge progress in bringing that down. We’ve slashed emissions from grid electricity by nearly half over the last 20 years, principally as a result of retiring coal power stations and a massive surge in solar PV and off-shore wind turbines. That’s a trend that’s likely to continue. According to predictions from the Department of Business, Energy and Industrial Strategy (BEIS), electricity will become greener than oil, LPG and even natural gas per kWh of heat within five years. 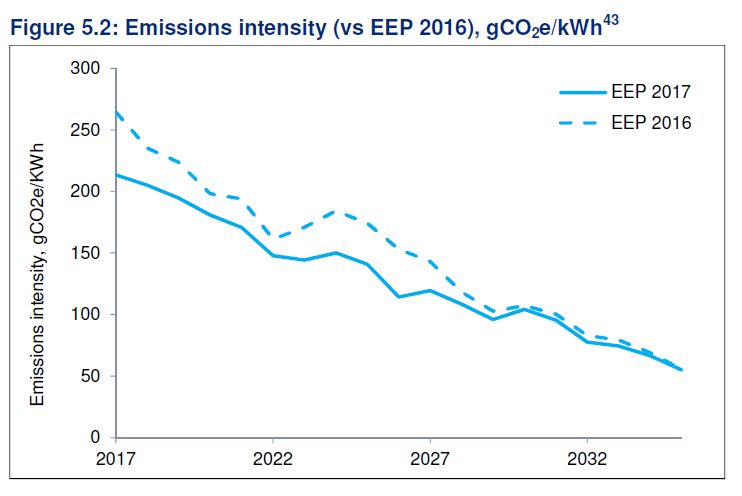 This is a game changer. Suddenly, we can potentially eliminate fossil fuels in new-builds, while saving huge costs. An electric radiant heat system (could be underfloor heating and/or electric radiators) for an 80msq floor area house (built to current building regulations) might cost well under £1000 – far less than a boiler and radiator system requiring gas pipe connections, while delivering heating at a lower environmental impact.

If we used heat pumps, which use electricity to extract additional, renewable heat from the ground or air around the building, it would slash emissions further, though it would cost more to deliver.

Switching to electricity for our heating on a large scale does present challenges. Aging power stations, renewable energy and electric vehicles mean electricity network operators (known as DNOs) are already contending with a rapidly changing landscape and requirements for new grid infrastructure. Adding the electrification of heat to this mix is potentially a big issue.

Proponents of electric heating argue that some of these impacts on the electricity network will, in practice, be mitigated through new ways of managing and ‘balancing’ electricity demand: smart metering, demand side management, battery storage and more renewables.

One thing we can be sure of – new buildings should be very well insulated. When houses are built, decisions around their construction stay with us for decades. If we build new houses to high insulation standards, they can viably be heated using green electricity with very little strain on the grid, and no real need for the use of expensive heat pumps. Some recent studies suggest that housing can be built to a super-energy-efficient Passivhaus standards for only a 5-10% uplift in procurement costs. This typically reduces heating demand by more than 75% compared to current building regulations.

A more challenging situation is the conversion of older properties off the gas grid, which are typically poorly insulated, and may even have no existing central heating system. Contrary to popular belief, heat pumps can work very effectively in these properties, and with our greener grid this is a sensible (in carbon terms) thing to do.

Typical emissions associated with heat pumps could mean a drop of more than 60% in emissions when compared to storage heaters or oil fired boilers. There is even a business start-up looking at selling heat under contract to house owners at rates below market price using a combination of heat pump, solar and battery storage, owned and maintained by the service provider.

Some countries, particularly in Northern Europe have already put heat pumps in homes, at large scale. Upskilling the UK heating industry to install heat pumps, to meet the level of installations being seen in Sweden and Germany, is on track. There have been significant improvements in the MCS installation scheme in recent times, leading to an improved design and installation process and happier customers overall.

It is impossible to ignore some of the concerns raised in the media relating to air source heat pumps, though the now defunct DECC department and Energy Saving Trust both conducted studies which suggested people are generally very satisfied with their installations. Heat pumps are straightforward to install, and modern, inverter-driven heat pumps are more flexible in their design constraints and more forgiving of variable use conditions than in the past.

Of course, the elephant in the room is cost. Installing a heat pump to replace a boiler costs around £8,000-£14,000 – a high barrier to anyone, especially those in fuel poverty. We need a long term strategy to identify how to bring those costs down, and make the technology accessible to a wide range of households.

One obvious solution is to rethink the current subsidy scheme – Renewable Heat Incentive (RHI) – that will close to new entrants in 2020. The RHI has been criticised for low uptake and for failing to bring the technology within reach of lower income homeowners.  The government has made some changes to the RHI, and new business models are emerging which may result in wider access to the scheme. But a better option after 2020 may be complete reinvention of the public support for renewable heat. For example, a simple grant programme focused on fuel poor homes in off-gas areas could deliver major change in the market, which could make real progress towards successfully decarbonising the UK’s heating sector.