Only a few years ago, it would have seemed absurd to suggest that Al Gore and Royal Dutch Shell might come out fighting for the same kind of energy transition.

But that’s exactly what has happened with the launch of the Better Energy, Greater Prosperity report, which calls for large-scale global decarbonisation.

The age of agreement

It is certainly a sign of the times when sustainability giants like Rocky Mountain Institute, Gore and Nick Stern are essentially endorsing the same vision of the end of the fossil fuel age – at the same level of urgency – as HSBC, Shell and more. The authors drive home the significance of this, saying:

“The fact that this agreement is possible between companies and organisations with different perspectives on and interests in the energy system should give decision-makers across the world confidence that it is possible simultaneously to grow the global economy and limit global warming to well below 2˚C, and that many of the key actions to achieve these goals are clear.”

The overwhelming message of the range of individuals and organisations behind the report is that we don’t have to forego the trappings on 21st century living to decarbonise.

An immediate decline for coal, an oil peak in the 2020s and a flat profile for gas after the same decade are the big headlines that shout of the ultimate end for fossil fuels. But it’s perhaps the hard-headed confidence in renewable energy technologies to fill the gaps where the old, dirty fuels have been that is most striking.

Naturally, the Energy Transitions Commission report looks as much at money matters as the numbers behind the quest to limit the effects of climate change, but crucially, the conclusion appears to be the same: whatever way you look at it, the reasons to act now are compelling. 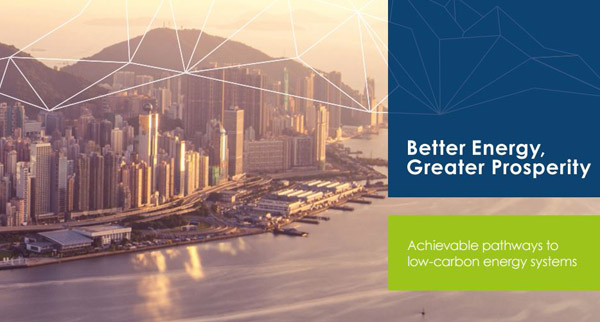 Electrification is a major focus of the initial stages of the strategy for decarbonisation. While it’s accepted that some heavy industry is not suitable for this approach, it emphasises that the technology is there to be utilised, whether that be hydrogen or biofuels – it’s just not rolling out quick enough at the moment. One of the most firm and positive prognoses – of many – is this one:

“By 2035, it will be feasible in many geographies to build a near-total-variable-renewable power system providing electricity at a maximum all-in cost of $70 per MWh.”

This means that renewables, backed up by energy storage, are fully competitive with fossil fuels, and takes into account projected declines in the cost of wind power and solar power, plus battery technology.

But while the optimism is palpable, there’s a lot more than just renewable energy generation and batteries to think about. It’s acknowledged that there is a long way to go in terms of decarbonising industry, then there are buildings and transport to consider. Ambition is fine, but needs application, as the authors explain:

“The transition to low-carbon energy systems across the world will require faster improvement than in the past 20 years and faster than the INDCs [Intended Nationally Determined Contributions] promise.”

The good news is that energy efficiency’s importance is not overlooked. It will be hard for a dramatically altered energy supply to deliver to its best potential without significant improvements to both existing buildings and new constructions. Concerted programmes for energy efficiency also deliver multiple economic benefits – something that’s clearly not ignored here.

Beyond the decline of fossil fuels and the inexorable rise of renewables, the report looks at other factors that will need to be in place to meet carbon reduction and economic needs. It paints a picture of a future offering elements of both ‘circular’ and ‘sharing’ economies, whereby waste will go back into the manufacture of goods, and resources like transport will be used more efficiently.

All in all, this is some gung-ho stuff, and very welcome. The bold statement from big business and high-profile green campaigners has a very transparent aim: for policy frameworks to be put in place which offer an equal level of ambition.

There is little doubt that changes at the biggest supermarkets could have a notable impact in reducing greenhouse gas emissions and waste.

Sustainability in business: navigating the path to net zero

Find out more about the ways to invest and implement a sustainability strategy as part of the UK’s green recovery.

Clean air zones: alleviating the impact on your business

More Clean Air Zones are in the planning stages in local authorities, where air quality is known to be in breach of…