The Community Energy Hub, a brand new resource for those getting involved in local renewable and energy efficiency, has been launched as part of Community Energy Fortnight. Graham Ayling, head of the Energy Saving Trust Foundation explains what community groups can learn from the hub, what it’s all about – and whether we’re on the verge of a local energy boom.

What’s the potential of community energy in the UK?

GA: The potential is huge. Research suggests there have been at least 5,000 community energy projects active in the UK over the last few years and the number is still growing. Community energy can mean all sorts of things; people often think about renewable energy owned and run locally, but there’s also been a huge amount of work around energy efficiency. Our low carbon future is going to be all about changes made on the ground, whether that’s local renewable energy, energy storage, energy efficiency or just good management of energy. This relies on millions of individual decisions in homes, businesses and organisations across the country, community energy offers the chance of working together to make those things happen much more quickly and effectively.

Has enough happened so far to capture this potential?

GA: We’re still a long way from reaching where we could be. The UK has less of a culture of community energy than some European nations. Take Denmark for example, where it’s long been part of the established way of doing things, so has become normalised.

But there’s been huge growth at grass roots level over the last decade or so. Many groups that started off as a few committed volunteers now have legal status, income and full-time employees, with a capacity to deliver multi-megawatt renewable energy schemes and local energy efficiency programmes. There’s also been a movement towards models where income from community renewable energy is reinvested for additional community benefits, such as tackling fuel poverty.

Is uncertainty over incentives like the Feed-in Tariff holding progress back?

GA: There’s no way you could say that what’s going on in policy isn’t potentially very damaging for community energy and renewable energy in particular. Most groups have no big cash reserves so are much less able to weather the storm in times of uncertainty, than big commercial companies. Sudden changes in policy also undermine the confidence of investors who have started to show an interest in the sector.

Of course the sector needs to stand on its own two feet, and programmes like the Feed-in Tariff were always intended to help low carbon energy become cost effective without government support more quickly. We believe that a sensible, smooth transition away from government support is needed – not knee-jerk decisions that undermine confidence and could set back the development of community energy by years. Community energy doesn’t need endless subsidy, but if it’s going to fulfil its potential it does need rational investment from government that will pay dividends for decades to come.

Don’t expect community energy groups to give up any time soon though!

What does the Community Energy Hub offer the sector?

GA: This ties in nicely to the last point. We firmly believe that whatever happens to policy, community energy will continue as the sector is driven by incredibly creative people who are passionate about what they do. As well as making the case for government investment, Energy Saving Trust Foundation is working with the sector to look at new business models that can help community energy continue to thrive in the long term, beyond the end of government support. Sharing information, collaboration and partnerships across the private and voluntary sectors are likely to become increasingly important.

This is where the Hub comes in. First, it’s a single point of contact, providing understandable information about all areas of community energy, to guide people through the processes needed to develop a scheme, whether large or small.

Second, it’s about helping the network to thrive. There’s huge generosity out there, with groups sharing information and supporting each other, but the burden of showing what works where needs to be shared. The Hub helps groups share and find the information they need, so they can focus their time on real collaboration around projects, rather than answer the same questions over and over again.

It’s also open to other organisations interested in supporting the sector, such as local authorities and businesses that might be interested in partnering with community projects and can be used to help identify potential partners… Ultimately, we hope this will help support the fledgling industry, and avoid a loss of momentum. 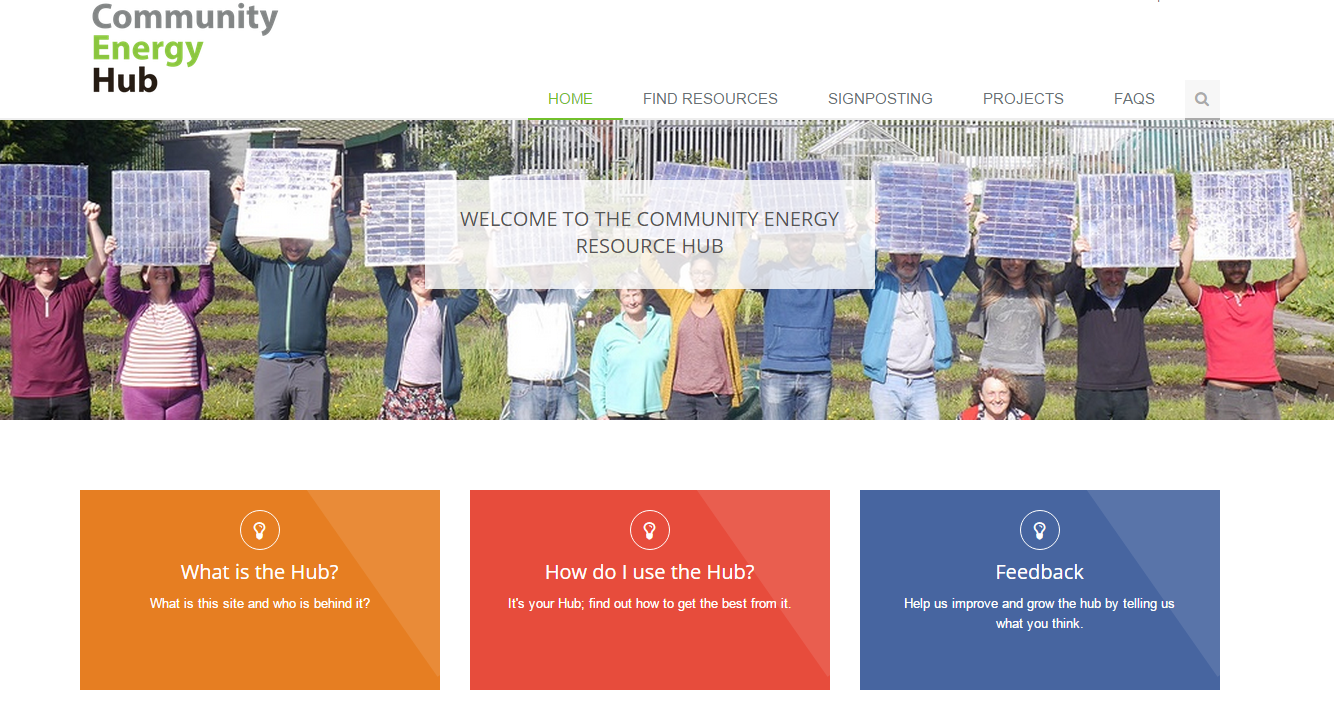 Are there a lot of potential funders for community energy out there? What form does the financial support available take?

GA: There are less grant funders than there used to be due to the advent of the Feed-in Tariff support scheme, but changes to that scheme could see a return to grants. Marks & Spencer, for example, has set up a community energy fund. Some local authorities also have small support schemes and there are loan schemes for community renewable energy.

The big market, though, is for proper partnership and local financing of schemes. We’re keen to explore how private sector organisations looking to get more involved in the communities they serve and boost their CSR credentials could work with and support community energy. For example, companies could host and buy electricity from a locally-owned community renewable energy system.

We’ve also supported community groups owning renewable energy installations on local public buildings.This can be a low risk option for the building owner as they don’t have to invest in the renewable energy plant themselves, but can buy the electricity. This can work well for  community groups who are able to sell their energy at retail rather than wholesale prices.

What’s the reasoning behind plans for the ‘self management’ of the Hub after March 2016? How will it work?

GA: It has a start-up funding from DECC and we’re working in partnership with Project Dirt, Community Energy England and others to make it happen. All of us agreed at the start that the intention would be to hand it over to community groups themselves, and we’re already in discussion to ensure a neat transition.

We’ve made sure it’s easy to update and maintain, and there’s plenty of scope for development. It’s important that it’s not a top-down initiative; it needs to stay relevant and directly tuned to the needs of groups. We’re confident that in the form we’ve come up with, it will.

What feedback have you had so far?

GA: It’s been really positive. Obviously it’s helped that we’ve worked with groups throughout to establish what was needed, but they’re happy with the structure and how easy it is to find information. Groups appreciate what it’s all about and what we’re trying to do, especially the need to avoid duplication.

I’d also like to say a big thanks to everyone who’s contributed to development of the hub and helped us with testing, it’s taken a lot of effort from a lot of people!

GA: It’s our ongoing aim to keep developing and improving content and it’s also a way we can make sure that community energy groups can find and use the resources Energy Saving Trust produce. Project Dirt are currently looking at continued development of the social networking side of things, to create better links between community groups, the private sector and civil society.

Are there any particularly inspirational case studies on there that you would signpost?

GA: Repowering London’s projects are really interesting, particularly Brixton Energy, which takes locally-owned PV on the roofs of public buildings as a starting point for economic empowerment, and really challenges the stereotype of community energy only being for middle-class people living in villages. There are some great rural examples too, like in Ashton Hayes, Cheshire. They’ve been going a long time and with the help of some impressive local carbon foot-printing and long term commitment made deep carbon reductions. The list is growing all the time though and we want as many groups as possible to register for free on the site and show just how strong, vibrant and innovative the sector has become.

GA: It’s organised by the Community Energy Coalition, a group of civil society organisations of which Energy Saving Trust Foundation is a member. It will raise the profile of what’s already going on in community energy and give people the chance to ‘touch and see’ projects as groups run open-days and events to show what they’re doing. Although the UK is culturally behind a few other countries with the concept of local energy initiatives, there’s some incredible, cutting-edge stuff out there.

We thought it would be a great time to launch the Hub, as it’s somewhere people can go if they’ve been excited by the potential of community energy and are interested in getting involved.

What would you say should be the first priorities for someone looking to establish community energy in their area?

GA: it’s all about getting others on board, so you’re not on your own and have a range of skills available. This can be a bit of a ‘chicken and egg’ scenario, as you need a vision for what can be done in your area to excite and engage people, whilst also being flexible enough to change, adapt and evolve that as others get involved, so it becomes a shared vision. Getting that balance right seems to really help sustain people through the challenges that are to come. A “quick win” project where you can see you’ve made a difference early on can really help to build confidence and reputation as well.

How do you see community energy changing over the next few years?

GA: The sector has grown and matured so much. It’s on the cusp of being huge. There are challenges ahead of course, but community energy has always been less about waiting for government to act and more about getting on with doing something yourself, innovating and leading the agenda. Prematurely removing the government investment that has helped the sector grow risks undermining that and wasting time, money and effort, but people won’t give up.

The sector’s time has really come in terms of technology. It’s much more affordable than ever before and when you look globally at the cost curves into the near future for green technology such as solar and wind energy versus fossil fuels, the writing is on the wall.

Of course, there also have to be changes to the UK’s creaking energy infrastructure, but it’s a massive opportunity to integrate low-carbon community energy through smarter energy management and storage. For too long we’ve been struggling against a monolithic, centralised energy system, but any rational approach to providing affordable, sustainable energy in the long term has to lead to a more locally-focused and people-focused approach in which community energy could have a huge role.

A community energy project can happen anywhere in the country, from remote villages to city neighbourhoods.

Community energy is all about a group of people coming together, taking action and using local resources to reduce, manage or generate…