Powered by sunshine: why electric vehicles and solar panels are a perfect match

Matt and his family were concerned by the climate emergency and its impact on the planet. When they moved to a new house in October 2019, they took the opportunity to explore ways to reduce their carbon emissions. Matt had been interested in installing solar panels for a long time but had been unable to at their previous home, because the roof was too steep, and the house was overshadowed by trees and neighbouring properties.

The family’s new home is a four-bedroom detached house with a southwest facing roof, making it suitable for solar photovoltaic (PV) panels. Matt contacted Home Energy Scotland for impartial, expert advice about which other technologies could be suitable for his new home. The advisor confirmed that solar PV could easily be installed and that other technologies would also be suitable.

Matt decided to install a 4.2kW solar PV system comprising 14 panels and a chargepoint for his new electric vehicle (EV). He used Energy Saving Trust’s Renewables Installer Finder to find three suitable companies to provide quotes. Matt chose to use a local installer who could do all the work rather than sub-contracting to others, as he thought this would give them more control over the quality and timeliness of the installation.

The installation took place over two and a half days in early February 2020 – with scaffolding constructed the week before – which was quicker than Matt expected. 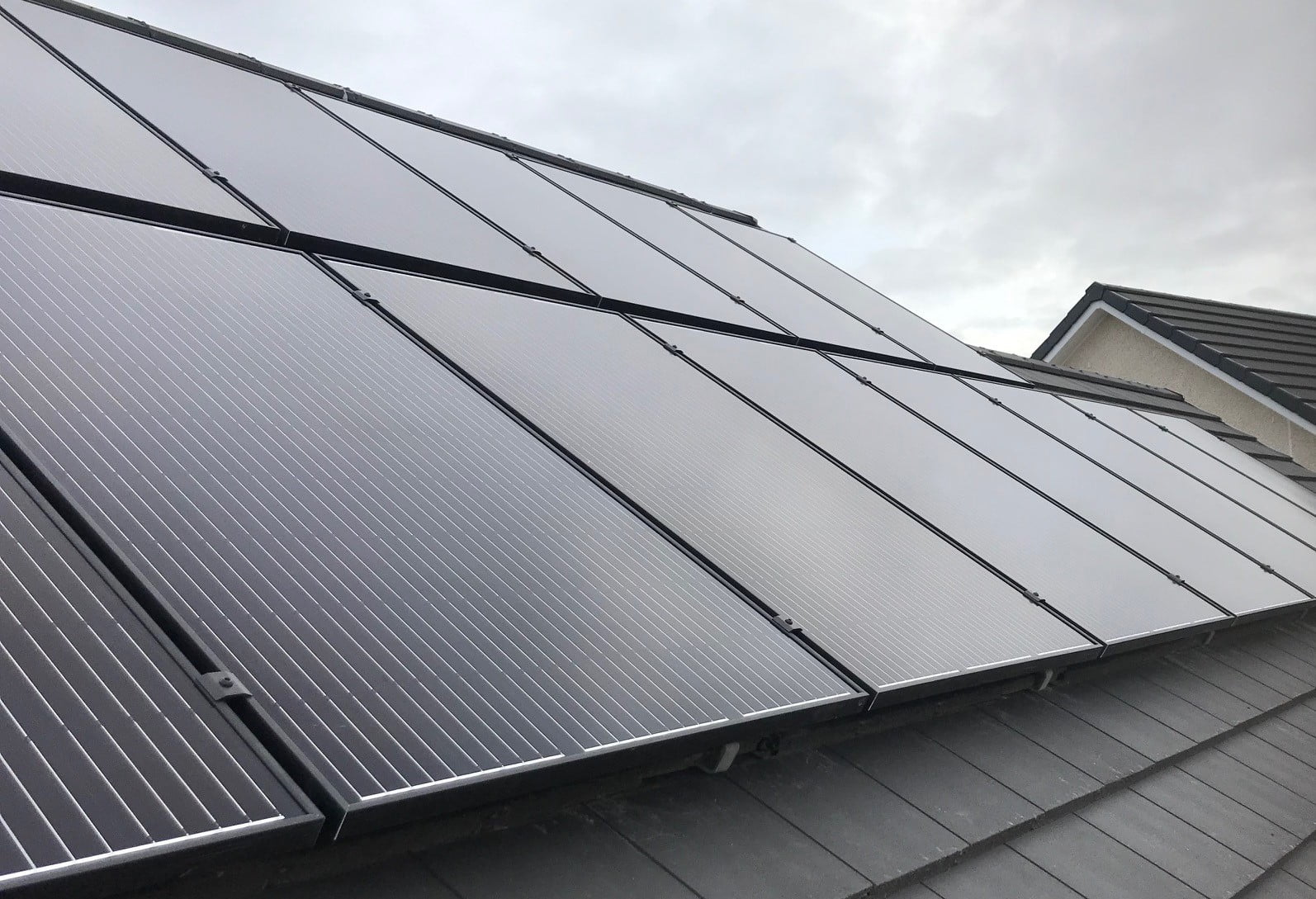 Matt and his family are really impressed with their new solar panels and electric car. The ability to generate electricity from the sun has excited the whole family, and Matt is deeply satisfied by the fact that driving his EV uses zero carbon electricity generated from his own solar panels.

They receive payments for the electricity they export to the grid through the Smart Export Guarantee (SEG), at 5p per kilowatt hour (kWh). As the cost of electricity is currently around 16p per kWh, it makes financial sense for the family to use as much electricity generated by the solar PV panels as possible, before exporting to the grid.

In the first year since having the panels installed, Matt and his family have used around 3,300kWh of electricity, both in the house and for charging the electric car. Over that same period, the panels have generated around 3,100kWh – so pretty much generating enough to cover usage. However, only 40% of the electricity generated by the panels was used in the house or charging the car, with the remaining 60% going to the grid.

Matt uses a smartphone app, which came with the chargepoint they installed, to monitor the amount of energy they generate and use. He’s always looking at the app to see how much electricity is being generated, as well as what appliances are using the electricity they’re generating. Since Covid-19, it’s been easy for the family to adjust their habits to make sure they’re using as much of their solar generated electricity as possible, as both Matt and his wife are home during the day.

Matt has plenty of words of wisdom for others thinking about installing solar PV panels and/or switching to an electric vehicle.

“I think that if you have an EV then installing solar panels is a no-brainer,” he says. “I was lucky enough to be able to combine the two, thanks to a low carbon transport loan from Energy Saving Trust. When you do this, it really brings home that you don’t need to rely on fossil fuels – just make sure you switch electricity supplier to one that uses 100% renewable sources, if you haven’t done so already!

“Ensure that you look carefully at the different tariffs that are offered by each company for their electricity – even though you have PV, you’ll still need to use electricity to charge your EV during the winter months.

“Finally, knowing that when we’re driving the car, it’s being powered by our own renewable electricity, with nothing from the grid, is a great feeling! It’s good to know we’re doing our bit to drive down carbon emissions.”

We spoke to Laura McGadie about her solar panels, which have been generating renewable electricity for her home for10 years.